With the release of new cryptocurrency reports, we have seen a total failure of multiple projects that either were flat out scams or failed projects that made billions of dollars with no intention of ever following through.

But it’s not just ICO projects that took billions in revenue from scamming or not producing their projects, it’s the flat out Multi Level Scams (which are basically pyramid schemes) or businesses that promise to send you 20 ETH or Bitcoins after you send .05 of the said cryptocurrency. Most people know, this is a warning sign. Even if they insist they need that 0.5 to confirm your address, it’s still a warning sign that many people have obviously missed. Millions are said to be lost this way. 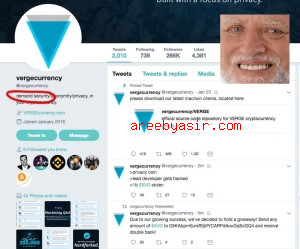 Of course, they regained control of their account, but the damage had been done. And this alone should have killed Verge, as a privacy coin token to get so easily hacked by scammers who told people to send any amount of XVG to get double back. We can only hope that the people investing weren’t stupid, but it happens. After all this is their official account that these hackers took over.

In my opinion this alone should have killed the Verge token altogether, but I guess people were able to forgive it and continue on, after all, people had invested heavily in this project and need it to succeed. I had demanded my investment back, as I demanded from Finom– another scam project that has no intention of actually producing the project. To Tron, that suddenly threw a curve ball to have people transfer their money from their wallet to the Exchange or risk losing your entire investment…yeah these aren’t good signs and it makes me extremely distrusting of their project. If this were a bank, people would be outraged and the lack of outrage is why these Projects like Tron are getting away with it.

And then there’s the celebrities that without their knowledge had their name hijacked to sell a scam. William Shatner was one said victim, Shatner posted on twitter:

Other celebrities who have been impersonated include John McAfee (who is very active in the cryptocurrency world); Elon Musk, Vitalik Buterin, one of the founders of Ethereum; Sir Richard Branson and even Donald Trump.

When choosing a project to buy into or invest in, you have to make proper choices. If an account like @WiliamShatners is tooting that they will give you 20 ETH if you send 0.5 ETH, do some due diligence. Confirm if this is an official account, go on reddit and see what people have to say about it. Directly message your doubts and concerns. If it’s the real deal, well then they should have to prove it.

But sometimes even with all the proper research, you will still fall victim to shitty projects and scams, but that’s life. I’m sure even though Mr. Shatner from his official twitter account posted that he isn’t the scam twitter account giving ETH, people will have probably still bought from it before it was taken down. How many thousands? Or millions? I guess we won’t know.

But this is just another reminder, that we need to centralize cryptocurrency under the general crypto community, or have these scams continue under the guise of decentralized. Nothing, not even Bitcoin or Ethereum is truly decentralized.  And even real coins can act like scams with their policies and sudden changes to the scope of the project. If the project no longer values the investor, it’s a shit coin and you should dump it. If a celebrity is endorsing a project, find out if its really them- reddit is usually a good place to filter the garbage or see some garbage.

And in the end, you have to do your own research. RESEARCH is key.