Despite Amazon’s strict policies against the sales of racist, homophobic, anti-semitic, Islamaphobic and general ‘hate glorifying’ goods, these items are still for sale and are being bought on Amazon.  According to Reuters, Action Center on Race & The Economy and the Partnership for Working Families, released the report today hammering Amazon the online shopping king, for failing miserably to enforce their policies.

“Products that promote or glorify hatred, violence, racial, sexual or religious intolerance or promote organizations with such views.” The two groups say they found toys with propaganda symbols, books and other products aimed at children to further normalize these intolerant or racist beliefs.

Through writing e-books and through Amazon’s Music store, they are giving these hate groups the ability to spread their hateful speech and message. Using these Amazon platforms, racist writers, musicians and ‘racist activists’ including violence against black people, Muslim, Jewish & LGBTQ people, supporters are able to sell their hate and make Amazon millions in profits, as well as fund the racist/hate groups.

The two watchdog groups that reported Amazons dirty shopping, through their report insist that Amazon take down these hate sellers, and also make a public stance against these hateful, racist, intolerant ideologies, as well as promising not to profit from them. They’re asking Amazon to remove these items from their platforms as well as destroy any physical products that are currently in their warehouses.

Amazon spokesman did say that they will shut down anyone breaking their rules, it’s a weak statement considering they should have been already removed.  Another spokesperson said they are currently removing some neo-Nazi bands that had been identified from its music platform.

Spotify, Google and Deezer all purged their libraries of racist music back in August 2017. In the same month, Apple removed Apple Pay support from white nationalist sites and Squarespace culled hate sites from its web hosting service.

Amazon also has a track record of holding payments for small businesses for small infringements or sometimes no particular reason, or even shut them down completely. It makes me wonder why it’s taken so long for them to purge the hate sellers.

It remains to be seen how much is actually left over, or how many try to circumvent the rules. Nobody thought tiki torches would ever be used a white supremacist march- but here it is. Of course this tiki torche company had nothing to do with the group. 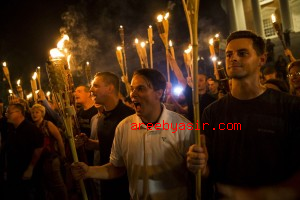 Large companies with large deep pockets and resources should be held accountable for such insults, they should also be easily able to calculate how much they have earned as a result of these hate sales; and pay it into charity to atone for not ‘catching’ them in time.What do you think? Did Amazon know and let it slide all this time until they got caught? Or was it a horrible over sight?
Cheers,
A.Yasir