QuadrigaCX goes under, leaving users frustrated and some without their coins/cryptocurrency

The news is surprising and unsettling. The millions one had, can literally die with another person.

I was always a little nervous of Quadriga and many exchanges since most of them don’t post any details about themselves, ownership or even a real address and phone number.  I was actually shocked to hear they were registered in Nova Scotia since many in the Vancouver area believed they were registered here (they did have a Vancouver address and phone number I believe).  But before I get into this situation I’ll mention what I’ve always mentioned which is “NEVER leave your money on an exchange” regardless of who it is (until such a time as we have insurance on our crypto in the same way that bank accounts can be insured). 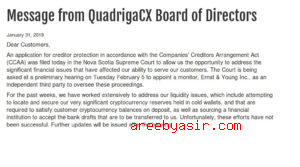 I believe based on the article that CIBC initiated the shutdown of Quadriga by freezing $28 Million of their assets:

But Quadriga alleged that the CIBC was wrong and only targeted the exchange because of mistrust of virtual currencies and called fears “that there must be shady dealings afoot” all of which was offensive and unsubstantiated. And Quadriga was right to call out CIBC’s actions.

I believe that marked the end for Quadriga and I for one actually agree with Quadriga.  Institutions in Canada are particularly anti-cryptocurrency, which is evident as many banks will refuse to wire money to buy crypto or equipment.  Banks can say what they want but we all know cash and bank accounts are used each for for illegal activities on a daily basis.  They have gone to great lengths to essentially declare any crypto activities as defacto illicit or illegal.  Of course from a business standpoint this is to be expected.  For banks to allow the free use and conversion of crypto is essentially a death sentence for themselves as well.

While I am disappointed at what happened with Quadriga we have to remember financial scams with traditional institutions and investments are well alive around the world even today.  The one difference is that cryptocurrency is generally uninsured.  There are steps that we as holders can take which means managing our own wallets which can reduce the risk significantly.  I read that $190 million is what Quadriga owes its customers, I would bet the vast majority is in coins that were sitting there.  I actually have friends with money in Quadriga whom I urged many times to manage their own wallets but my warnings went largely unheeded.

Quadriga isn’t alone in this. All exchanges can go poof overnight for any given reason. For Quadriga it the was the sudden death of the owner, who did not leave the passwords or keys with his wife, or another trusted person within the company. This was just insane oversight on his part. He left her with an encrypted laptop with nothing anyone will be able to do to get in.

There was no contingency plan here which makes it Quadriga’s fault for essentially hurting thousands of people out of there money. They will be filing for bankruptcy and if you had an account there with them, I do not know if you will ever see that money again.

We wait to see what will unfold next, but this whole story is either ridiculously unfortunate and coincidental or something shady is afoot here. Neither will produce your coins.

What do you think?

UPDATE: The internet is abuzz with accusations that the Quadriga CEO and his wife are pulling one of the largest scams in cryptocurrency: The CEO of Quadriga faked his own death. The claims are not too far fetched because quite honestly, it popped into my mind when I heard that the CEO alone had the only knowledge and keys to the cold storage – which as I said was either ridiculously coincidental or planned. 2 weeks before he died he had made a will, and according to reports, you cannot just die of Crohns disease suddenly unless you are severely malnourished, not to mention how easy it is to buy  a fake death certificate in India.…these are again just accusations but $190 million is a lot of money on the line here.

UPDATE: The FBI has joined in with the investigation. Kraken’s Powell, who has been the source of info the FBI and the RCMP in Canada, is casting doubt that Quadriga ever placed millions and millions of dollars in cold storage. Infact, reports suggest that Quadriga moved assets to ‘hot wallets’ tied to another exchange. The cold storage seems to have been empty for months before Cotton ‘passed away’.

Kraken is offering a reward of $100k for tips that lead to the recover of the funds, and stated that no funds were held at Kraken. Powell stated that he hopes that with others looking and digging, there might be a breakthrough.