NCIX began as a typical player in the booming 1997 computer hardware era and quickly grew to rival and arguably best all competition in Canada as one of the largest computer hardware companies while other competitors went out of business in a segment many felt was unsustainable.

For me the story started around 2002 when I was still in post secondary at BCIT but as I began writing this I couldn’t help by deviate from back in 1997 when I was 13 and was excited to get my first computed which would be the one that would set me on the path to the IT industry from a very young age.

Going Off Track – My Computer History

I used to go to the famous area of Richmond on Bridgeport Road where all the computer stores were, of course there were areas in Broadway in Vancouver too.   My first computer that I remember proudly as a Pentium 75Mhz with 8MB of RAM and a large 1GB HDD made by IPC (a local Vancouver manufacturer) ironically from a place in Whiterock (they had the best deal I knew of at the time).  The second computer I owned came from this area of Richmond (the name of the retailer eludes me but I believe there is now a textile or paint supplier in the same building!).  In Richmond I remember Cici from Canada Computer aka cancomputer.com who went out of business around 2004-2005 (a different company than today’s Canada Computer which is ironically taking over most of the old leases from NCIX).  Canada Computer was always good to me so I shopped quite a bit there.

Getting back on track to 2002, I bought a few parts in Vancouver from a place called ATIC but then heard about NCIX, their price matching and friendly service.  I actually still have one of the first items an old 80GB IDE Hard Drive with an NCIX label from back then.

So essentially since 2002 I’ve been a customer of NCIX that has purchased a LOT of equipment from them and have probably built dozens of computers from them.  Their prices and service were great, albeit I knew they had the typical restocking fees that the oldschool retailers did (an accepted part of business since I’ve never needed to return anything because I always knew what I was buying and what I wanted).  My experiences were generally very good but I will comment on the few issues I had, around 2006 during boxing day I had to keep following up on some Optical Discs I had bought that weren’t delivered to me.  A few times I bought SATA cables from them and was shocked to find broken connectors in them, the staff at the Langley store was somewhat unpleasant at these exchanges insisting “these are all brand new”.   Now that I think about it, it could have just been left over molding from production especially since looking back at the cables they don’t seem to be of the highest quality for sure.  Fast forward to the last few years I noticed their prices have increased, they had less stock, things took longer to get, longer to ship and once I ordered an item online by mistake and told them right away (but they still shipped it and replied after I got the product and made no offer to resolve the issue).  Still, these weren’t deal breakers but I did notice as they expanded their retail front that the prices and service were slightly decreasing especially on my favorite site directcanada.com and two other similar sites they ran.

One of their flagship stores in Aberdeen Center (Richmond BC) closed down and at that point I didn’t suspect much (a lot of stores close down there because the rent is super high).  But over the last 2 years or so I saw the decline of the Langley and Surrey store, the shelves were in disarray, there were few staff members and almost no stock on the floor (not an issue for me still) but I couldn’t help but say each time “are you guys closing?”.  I’ve never paid attention to the NCIX forums but happened to browse it when I placed my last order the other month (an order still not fulfilled and one I don’t believe will be with the amount of customers saying they’ve waited weeks or months for refunds for non-delivered products).  The Surrey store closed around Nov 18th suddenly just a few days after I picked up a few power supplies (at that point when I was in the store and was told they turned their phones off and that’s why no one answered my calls I was suspicious). I  saw a list of closures on the NCIX forums, saw a deleted thread on Redflagdeals about them going bankrupt (presumably and upsettingly because NCIX was a Sponsor of RFD).  However a more thorough search showed their other locations were up for lease and were being taken over by competitors such as Canada Computers.

Why Did They Go Under?

From what I’ve read and suspected initially is that the expansion with so many extra stores did it and I read further that management believed more in retail than online ultimately killed them, on top of internal and customer service issues, things compounded fast and it’s all spilling out on social media with disgruntled customers and ex-employees.  I’ve personally known a number of NCIX employees and they all had good things to say about their experience but this was in the pre-2012 days.

It appears cash flow issues related to the retail expansion and apparently a completely unsuccessful expansion into the US (full of complaints) is what brought it down.  The price and stock issues I believe were just a symptom of the larger issue of cash flow and losses due to unprofitable brick and mortar stores. 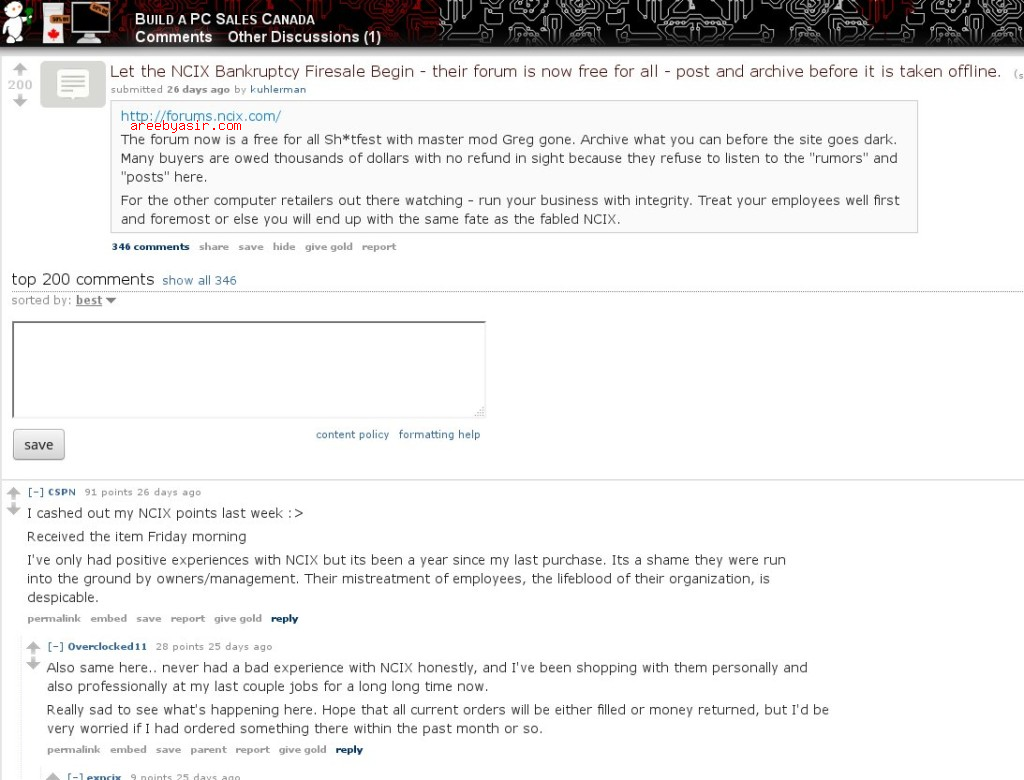 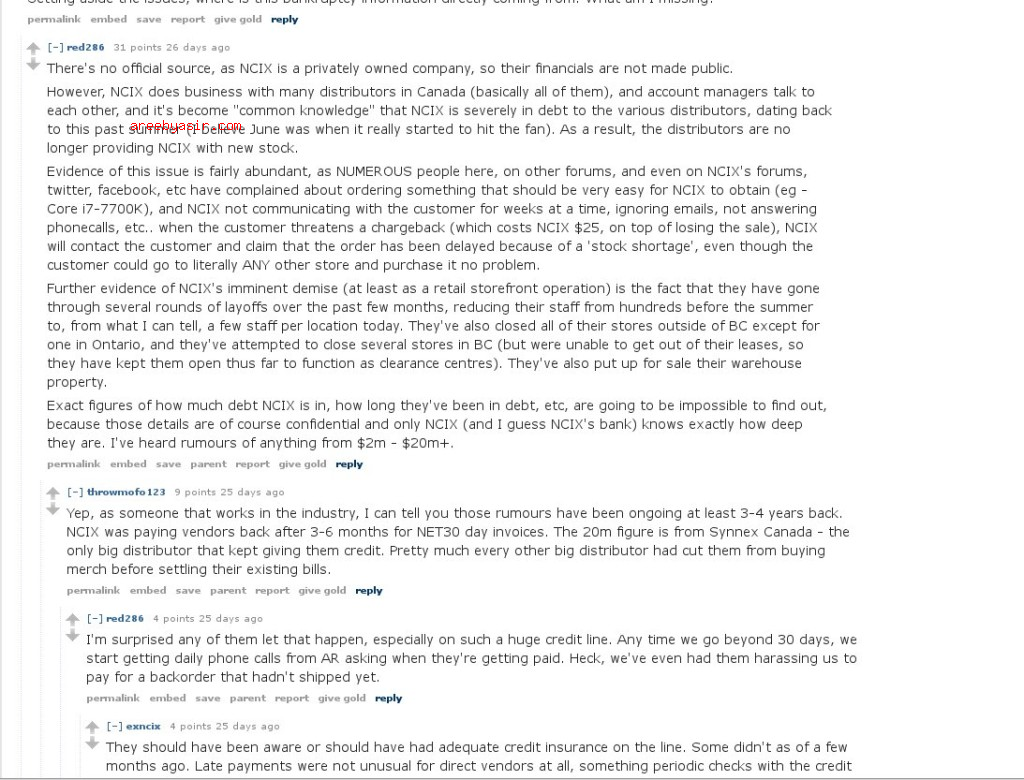 Why Am I Upset?

I’ve been a loyal customer for over 15-years and right until the end the ownership of NCIX never made any announcement whatsoever, and to this day they are still taking orders and collecting money. 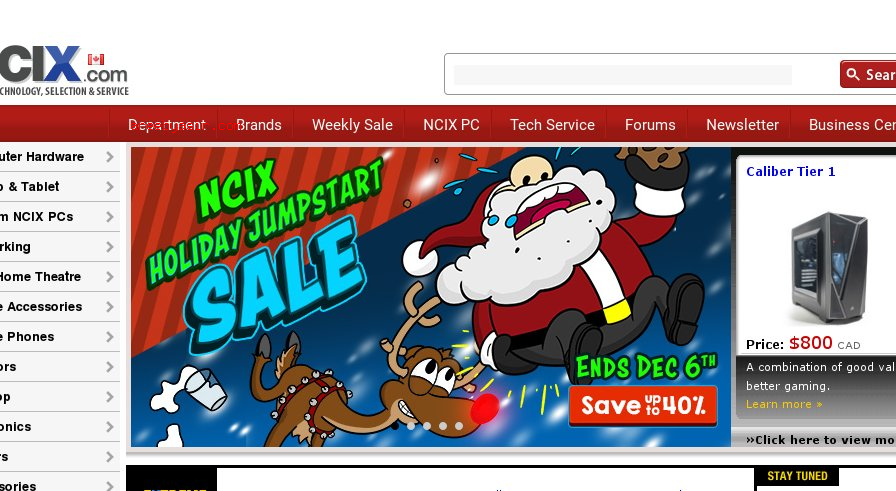 This is where I get upset and would say that I would never do business with any new company under that same ownership/management in the future.  It also seems this was completely avoidable if the management had heeded internal and external suggestions about improving and increasing the online shopping experience. My only complaint is that you couldn’t search by price or sort items by price.  Even with the bankruptcy I believe they could have continued to succeed and restructure by being online only or just a handful of very small stores for sales and online order pickups but at this stage with the amount of negative attention generated and my own situation I don’t think it could be successful.

The other part that is disappointing is that while I do suspect many complaints about the ownership to be true, there are also racial undertones to it which seem to stem from a time long before the complaints started.  And for that reason I do believe some claims may need to be taken with a grain of salt aside from the facts of the customer experience going horribly wrong in recent months and years.