Bitcoin Gold Scam Heist – Who Should Be Held Responsible?

For those who don’t know Bitcoin Gold is yet another fork from Bitcoin.  As many users warned even before this, with BCH (Bitcoin Cash) to be careful of these coins because they have NO official wallet and rely on random third party wallets.  Particular there were warnings for BCH that if you try claiming your free BCH that a bad wallet creator could take your wallet.dat to steal your actual BTC (Bitcoins) so prudent users moved money from their original wallet before claiming.

With Bitcoin Gold the issue was different, there was no wallet (I have no idea how so many projects don’t have their own guaranteed, safe original wallets) so people were understandably looking to get into BTG with a wallet.  One such wallet was “mybtgwallet.com” who the BTG team recommended on their website and Twitter.

This wallet was apparently created by someone they claimed to work with and a developer named “John Dass”, essentially the wallet asked users to upload keys and passwords for their other currencies and ultimately many people lost a lot of money totaling in the millions of various coins including Bitcoin and Ethereum.  The BTG team seems to dispute this version of events and claim John Dass was not a developer but then why and how can some random person declare themselves a developer and scam users so easily?  This is a big part of the basis of the lawsuit against the BTG team. 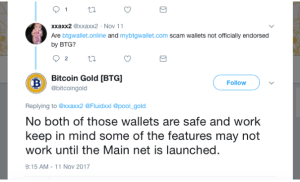 Lots of users on Reddit began calling the BTG team out and some have apparently filed a lawsuit.

WARNING: Bitcoin Gold’s official website linked to a scam wallet that stole user funds, including my own, for weeks. from BitcoinMarkets

I don’t see that BTG has been up front about the issue.  It’s been reported that the BTG team did their best to silence news of this and threatened the victims that they wouldn’t be compensated if they made their experience public.  If that is true it really speaks volumes about the project, team, trustworthiness and integrity of the coin.

If the Reddit community and experiences are true as posted online then I would say BTG is liable for the losses for many reasons with aggravating factors being that they did little to vet, warn or stop this scam from happening and have appeared to have not helped the victims. 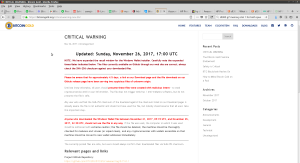 What are my personal thoughts and opinion?

Looking at their team profile looks has little to no information.  Most projects at least have a bio and more info about their background.

Their lead developer is named “h4x3rotab” with no picture or info at all so I’m very skeptical. 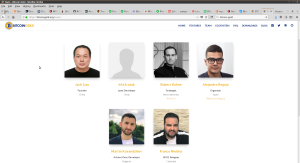 I’ve reached out to the BTG team and will post any response if any.