What does “HODLING” mean in cryptocurrency and Bitcoin Trading Strategy? 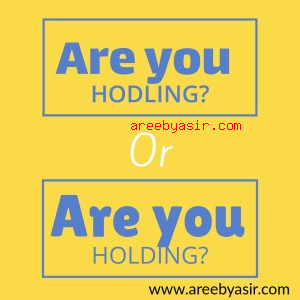 So here’s the post on Bitcointalk.org that apparently started it all once it made the rounds on reddit:

Below is the original words. Behold, the origins of HODL!

I type d that tyitle twice because I knew it was wrong the first time.  Still wrong.  w/e.  GF’s out at a lesbian bar, BTC crashing WHY AM I HOLDING? I’LL TELL YOU WHY.  It’s because I’m a bad trader and I KNOW I’M A BAD TRADER.  Yeah you good traders can spot the highs and the lows pit pat piffy wing wong wang just like that and make a millino bucks sure no problem bro.  Likewise the weak hands are like OH NO IT’S GOING DOWN I’M GONNA SELL he he he and then they’re like OH GOD MY ASSHOLE when the SMART traders who KNOW WHAT THE FUCK THEY’RE DOING buy back in but you know what?  I’m not part of that group.  When the traders buy back in I’m already part of the market capital so GUESS WHO YOU’RE CHEATING day traders NOT ME~!  Those taunt threads saying “OHH YOU SHOULD HAVE SOLD” YEAH NO SHIT.  NO SHIT I SHOULD HAVE SOLD.  I SHOULD HAVE SOLD MOMENTS BEFORE EVERY SELL AND BOUGHT MOMENTS BEFORE EVERY BUY BUT YOU KNOW WHAT NOT EVERYBODY IS AS COOL AS YOU.  You only sell in a bear market if you are a good day trader or an illusioned noob.  The people inbetween hold.  In a zero-sum game such as this, traders can only take your money if you sell.

My wife asked me what the term “HODLING” or “HODL” meant because it’s been referenced all over social media.  I honestly just thought it was the ticket symbol for Interstellar Holdings HOLD spelled wrong!

In the above post the poster goes on a rant about why they decided to hold apparently to spite the “day traders”.  Some have said the poster was drunk but could it also just be an angry rant, combined with life issues and a few typos?

We may never know for sure because I haven’t read the hundreds of pages in the thread and I am not sure where the poster is now or if they’ve still held their BTC or not.  If they’ve still hold on until recently they’ve obviously been right to hold but as we all say “hindsight is 20/20” back in those days no one was sure Bitcoin would continue its metaphoric rise to hit the 20K mark and settle back down at the approximately 13K mark at the time of this writing.

Whatever the real story may have been behind the post, a lot of crypto traders and investors are really referring this rant to explain just how wise it is to hold onto their currency despite apparent crashes.

Personally I’m all for HODLING if it’s based on fear and not by a real technical or game changer in a currency.