Step Back Fiat, We Got This.

So Mastercard had an outage, so the CryptoVerse beat it down with tweets to make sure it knew what’s up.

After reading so many bash pieces on Elon Musk, it was a welcomed break to read something fun.

Mastercard had a severe outage last week, that piled up to many people being unable to use their cards. Visa had a draw back not long ago, and crypto-internet wouldn’t let the world forget it. 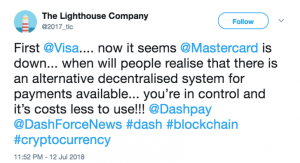 The Financial Times reported that it had a ‘global impact’, creating outrage and frustration from around the globe over this glitch. Customers took to twitter to complain to the credit card giant, which did eventually resolve the issue and service resumed for their customers.

Well, not for Crypto Twitter, which took this time and pleasure to give Mastercard and their press team the social media headache of the decade. 🙂

100’s of comments poured in with some of the most delightful and hilarious tweets. 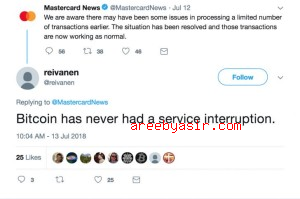 But this public bashing did bring the very nature of blockchain technology and finance into light. If Mastercard adopts with their own private blockchain without the pressmissionless public blockchain, they could very well make a system similar to cryptocurrency. But without the insecurity.

I’m excited to see how the financial world changes alongside cryptocurrency.

The future is near?