Tron Fans rejoice! This is great news, actually this is huge news! This move has pretty much solidified TRX’s dominate entry into the cryptoscene. What does this mean? Well the more Exchanges make it easier to buy and sell TRX, the more adoption it will have.

So on Sept 17th, we can expect a surge in value? 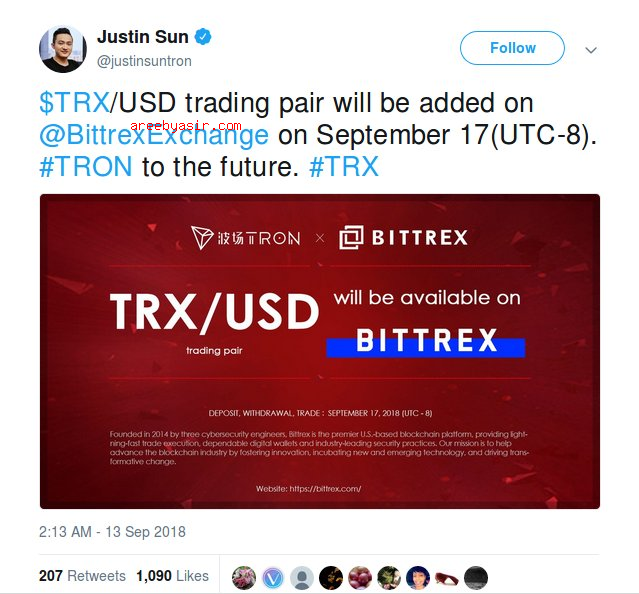 There are actually many enthusiastic supporters already slating Tron to hit $1-$3 in 3-5 years- which I agree with completely.

Bittrex Exchange for those who don’t know, is one of the worlds most well known Exchanges in cryptocurrency trading. With a total daily volume of $61 million worth of crypto traded on the platform. And this news is just another step closer to Tron taking over the cryptoscene.

As it it now, TRX honestly should already be worth $1. It’s made huge leaps and strides whereas many other coins that came in didn’t even have half of the gusto Tron has. The team is strong, Justin Sun is passionate, and the TRX fans are an incredible group of loyalists. It reminds me a lot of the Dogecoin community (minus the schills).

To give you some back story on why I was hard on Tron and why I have changed my opinion.

Tron’s migration is one of the biggest reasons I was worried about Justin Sun competence to lead this. But after finally getting all the information I needed to safely exchange my useless Tokens for the real coins, I could relax and focus back on the project. Tron’s fans were upset during TRX’s announcement of the things they had accomplished, but there was no reason to be, in fact, it was this announcement that garnered back my faith in Justin Sun and the project.

There were tons of ICO scams going on at this time, and FINOM was an ICO I invested in and still is the biggest reason why I distrust ICO groups and the hype of ICO’s. FINOM while not an obvious scam, still isn’t a trust worthy project entirely and will need to follow through and complete a lot more before I get my faith back.

Back in 2009, my wife came to me about a little something called Bitcoin. I looked at it, and was mortified as any IT professional would be. This thing had security and privacy holes that broke almost every IT protocol created to make things secure. And here she was saying ‘mine it’. I honestly thought it was ‘cute’ that she was this out of her mind. But she insisted, so I took out an old laptop I wasn’t using and mined Bitcoin. Needless to say, this privacy nightmare of a coin ended up making oodles of money.

My wife was also not interested in Finom  and didn’t think it was a good idea, I didn’t listen….

My wife told me to use half our litecoin to get some ETH, I thought she was insane for wanting to use half of the 2nd rated coin on the market for ETH (another coin that is a nightmare). Soon after Charlie Lee dumped all his Litecoin, and Litecoin fell from the #2 spot, ETH took the spot instead.

My wife told me about Tron and I was against it, but at this point I learned just to trust her. I asked her how much she wanted to buy of TRX tokens that were uselessly hanging on to a dying ETH. She said she hasn’t felt like this since Bitcoin….I literally said “say no more I’m buying thousands”.

This story may not resonate with many, but let me tell you, my wife who’s an accountant for my company and the mother to my kids has this strange gift of picking cryptocurrencies. It’s insane, but so far, she’s been insanely right about a lot of things I have been logically against. And it’s paid off- very well. So I don’t question her.

If she thinks Tron really could be the next Bitcoin, I believe her. So when this news about Bittrex came, I looked at her like are you some kind of Cryptocurrency guru? Should I worship you?

So my friends, if you haven’t already, get yourself some cheap TRX. A $100 now could be worth loads in 5-10 years. Bitcoin took from 2009 to 2017, and it might not take Tron that much time or it might take longer. But it’s an investment that you hodl and wait for.