This post is long over due. Summer vacation and I was taking some time to hang out with my wife and kids. So I’m a little behind. But the kids are back to school now so it’s back to the grind.

Thanks to Mr. Torvalds!  20 years since the adoption of Linux! We’ve come a long way since 1991 when Linus released the first version of Linux.  In 1992 Linus licensed his Linux creation under the GPL which propelled it to where it is today since it was essentially Open Source.  In 1993 Slackware was the first mass adopted distribution.

And what’s news to many is that in 1996 he got bit by a penguin at the aquarium and that’s why Linux’s mascot is the lovable penguin we know today! Yeah, the penguins got some history with Linus.

I won’t copy everything from the Linux Foundation (which Linus works for) has produced as the 20 year milestones of Linux and I think it is a little too humble!  It should read that essentially Linux powers the Cloud today and almost all mobile and embedded devices!

I also think we should really thank the forefather of Unix and by relation, Linux “Ken Thompson” who essentially created the first version of Unix in 1969!  From there we know there have been many forks of Unix, including BSD and one of the most famous is of course Linus Torvalds Linux! 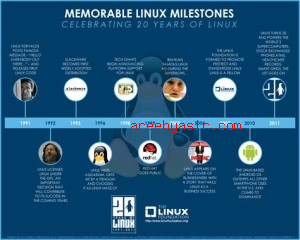 A good part of the internet is run on Linux today.

Update: After Compevo.com posted my tweet it went some what insane with the reaction. Perhaps I should have just stuck to my original plan of the pic saying “The Internet as we know it today wouldn’t exit without Linus” but it was too long, so I thought what the heck, people would read the article and know what I’m talking about….I was wrong, I was so very wrong. People not only didn’t read the tweet clearly, but didn’t read the article either. My heart took a little stab wound today hahaha 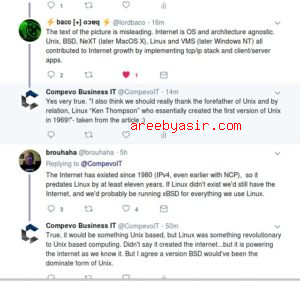 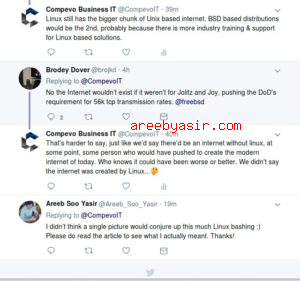 Sorry for the Confusion BSD family!

But seriously just to clarify to the twitter readers who went full on blood thirsty today, Linus didn’t create the internet. Yes Netflix is using BSD and it’s got a 33% portion which is incredible if you realize how big that number is, but Linux might have a slightly larger chunk of the internet. In fact here’s an article naming 50 places that use Linux that you might not have known about. But it’s also important to note, that when they say “Linux” they mean Unix sometimes…. I don’t know why even tech places make this mistake.

If we plunk it together with this article we can say Linux probably maybe by a few percentage has more of the internet and it’s most likely growing if you compare to Windows overall. As both BSD and Linux grow, it’s hard to say which one would come out as the winner, since both are important to different industries.

Not to say that BSD isn’t amazing, it is and together with Linux takes down Windows rather nicely,  but this was just supposed to be a tip of the hat thank you to Linus Trovalds, not a indirect dagger at BSD. I fixed the picture so that it reflects what I meant in this article.  🙂

Sorry for the confusion it caused!