One of those claims is that Bitcoin was created by the CIA, however this may be contradicted by the fact he also claims he met a Satoshi Nakamoto of Japan.  As proof he shows a Passport bearing the same name: 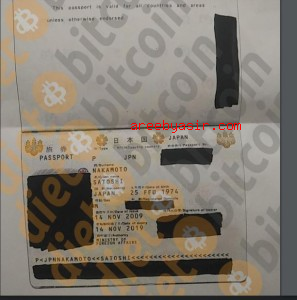 Of course it is possible someone from Japan could be working for the CIA, most people don’t believe a single person created Bitcoin.  So I do think there is credence to believing a large organization such as the CIA or other resourceful and skilled group created Bitcoin (so I call this one plausible).

Some critics have said his website for his coin Diet Bitcoin was nearly copied from the original bitcoin.org and that so are the specs.  I’m going to be fair in that I don’t see how Diet Bitcoin is any worse than other Bitcoin forks such as Bitcoin Gold.  As many know I am against hardforks as I see them as counterfeiting, being confusing and just simply wrong but it also illustrates weaknesses in any currency which can be copied in such a manner (where I believe forks should be impossible to keep the network secure and ensure integrity).