The Cyber Security Risk Of A Shut Down

Ever go on a crazy roller coaster ride? One that you know you shouldn’t go on? But it looks so thrilling you just go on it anyways? It’s amazing and thrilling alright. But it’s also terrifying and your soul comes out from your mouth, as your life hangs in the hands of the teenage operator.

That’s what IT feels like right now. A literal roller coaster. Built by forefather engineers who had a vision of a better ride, but being managed and handled by people who don’t know how the ride was built or works. This is IT now.

I have been trying to avoid reading news about the government shut down taking place under President Trump’s administration in the US. There is so much harm that I see coming from it, that it gives an IT professional anxiety just thinking about it.

Aside from the obvious serious risks, the military, nuclear sites, spy agencies, facilities that are run under the government, such as: airport security and workers in different government institutions, schools and numerous other organizations.  But there is another scary monster lurking in all this mess: The cyber threat.

Databases of the military, social and government offices are at risk here. That’s everything from weapons, to nukes to…well everything that a scary enemy is looking for to exploit. Without government workers to come in and keep everything intact, the US faces a cyber attack risk that is beyond anything we have ever seen-in history..

My biggest concern, is the military. That is the lifeline of a country.  For the first time in history, members of the military are working without pay. How can this be happening? That is the military, that is a big deal. A cyber attack at a military installation that does not have people overseeing it, could spell disaster. And as a trickle effect, it can also impact allies like us here in Canada.

We have already seen what can happen if spies are caught in other countries, imagine if a database of spies are hacked? The lives at risk are real, the cost is too high. This isn’t Hollywood but a reality.

We learned not too long ago that the DHS issued emergency directive to prevent DNS hijacking attacks– has that been fixed? 773 million passwords were leaked in “collection 1”, that was uncovered by Troy Hunt who said:

“Collection #1 is a set of email addresses and passwords totalling 2,692,818,238 rows. It’s made up of many different individual data breaches from literally thousands of different sources. (And yes, fellow techies, that’s a sizeable amount more than a 32-bit integer can hold.) In total, there are 1,160,253,228 unique combinations of email addresses and passwords. This is when treating the password as case sensitive but the email address as not case sensitive. This also includes some junk because hackers being hackers, they don’t always neatly format their data dumps into an easily consumable fashion. (I found a combination of different delimiter types including colons, semicolons, spaces and indeed a combination of different file types such as delimited text files, files containing SQL statements and other compressed archives.)”

This is no laughing matter and I am not sure why the news of this didn’t honestly set fires all over IT. This is happening. We need this shut down to end- very immediately.  We are becoming very complacent on cyber security and perhaps people like Mr. Trump can’t appreciate how serious this is because like with many people who not in IT, they have become ‘used to cyber attacks’ so much so, that it no longer means anything.

Here’s a good list of the Top 10 cyber security risks of a government shut down, and I honestly wish I hadn’t read it.  It’s anxiety inducing. Every fiber of my IT being is telling me, this is going real bad real fast. Offer prayers to whatever God or no-God you believe in, because we need it.

It’s like watching climate change starting to show the effects of disastrous human decisions, and everybody’s talking about it, and yet, little to nothing is being done to change or reverse it. We are on the brink of another extinction and it’s just passing news. This is what it cyber security feels like to me right now. It’s a mess. With insecure IoT tech, with backdoor government spyware and cybersecurity being entrusted to techs who are complacent when it comes to security, the list is just honestly too long.

I am worried what the next 50 years has in store for cyber security and privacy. We’re going to be throwing AI robotics in the mix so we’re in for an amazing but terrifying ride.

I leave you with this to ponder as I return to watching cat videos on youtube because I have to calm down from all this ‘risk’ we’re living in right now. 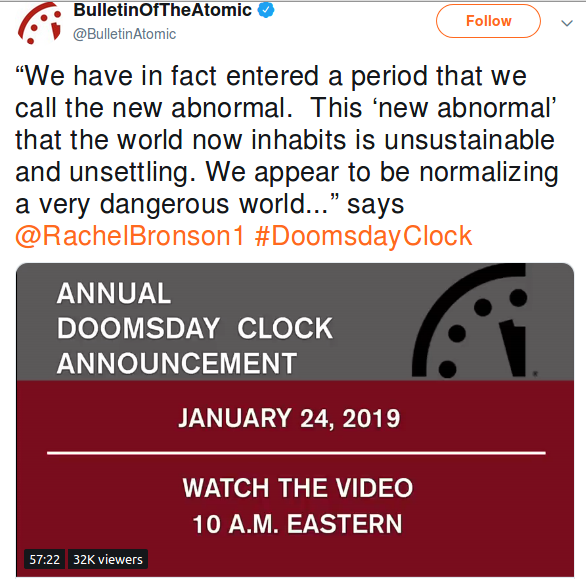 What do you think? How has the shut down made you worried?