Green Computing with a Server Based Desktop Workstation

A lot of people whether friends or family wonder what kind of computer I have and usually say something along the lines of “Areeb must have a supercomputer as a PC”.  Most people are surprised when it couldn’t be further from the truth, and even more, I have no need for a more powerful computer.

A few months ago I decided to upgrade from a self-built AMD Phenom Quad Core CPU with 8GB of RAM and RAID 1 x 1TB hard drives, not because I needed the CPU power, but because I wanted more RAM and grew tired of maintaining so many physical computers in my personal space.

Prior to this I used to have a separate server for all of my testing, VPS and another for filebackups and media.  But it really was quite the waste to use so much extra power when those other systems sat mainly idle.

My solution was to make a hybrid, Desktop workstation on my own (I always prefer to build my own systems).  I must admit I didn’t have an exact plan and it was more of a work in progress when I first started.

My Home Made Workstation

I have used servers based on the AMD Opteron 2400 (Opteron 2419EE) series and loved them because of their low wattage and high cores.  Almost any of them would give me more power than I had before (which I didn’t need).

The Coolermaster case is fantastic with so many large fans. I was getting a loud and annoying errrerr whirring noise from the CPU fan at the rear even with an exhaust fan there due to heat. By plugging in the included large top vents this fixed it. I suspect the rear of the case with the cards being there is one of the hotter areas in a PC case (heat coming from GPU and also LSI 9200). I was surprised that this was the case even with a 120MM rear exhaust fan.  The noise does still happen sometimes, to get rid of it permanently I suspect I’ll need to actively cool and move air from those 2 cards.  I am in the middle of a very hot summer and the noise hasn’t come back, the solution has been the top vents and also a PCI Slot cooler sucking the LSI card’s hot air out of the back.  The system now runs very cool even in summer temperatures.

I’ve always been a fan of AMD so I couldn’t resist when I came across this model.

HP XW9400 but is really a rebranded Tyan S2915E (I love Tyan products because I find they are incredibly stable and long-lasting, no Asus Desktop product can compare in my opinion). 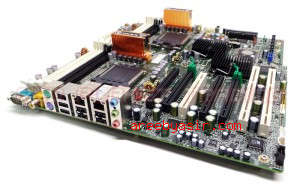 Can be flashed with Tyan firmware and in case of a bad flash it has a standard ROM chip that can be replaced and/or flashed even from Linux (using Flashrom).

Since I bought a brand new HP XW9400 motherboard there were some challenges.  First of all it came with standoffs meant for the HP XW9400 case but are completely useless for a standard EATX case.  To make it worse they are TORX screws with a security bit in the middle.  Fortunately it is fairly easy to break the security bits off using a flat head screw driver.

Power Supply is not a standard ATX, I bought one used from the XW8400 (interestingly enough the ones branded as XW9400 are missing the memory power connector so will not work).

What I like about this power supply is that it is incredibly quiet.

You NEED to use both processors otherwise only the first slot (#2) x16 graphics will work and no other PCI/PCI-E slot will work!  They had to design it with that minimum in mind because otherwise the system couldn’t post without a graphics card installed.  I love this system so much I built another and thought I would save power by using a single CPU.  It is commonly known that you lose the Memory RAM DIMMs for the corresponding socket when you don’t populate it but the documentation from HP and Tyan does not advise that you lose all the other slots by not using the second CPU!   This is something that had be wasting more time than I’d like to admit troubleshooting.  There is the possibility of using a Pass-Thru CPU but I can’t find one they are apparently expensive and rare.  I hope other XW9400/Tyan S2915

Many normal ATX power supplies offer the 8 pin EPS12V connector and the standard ATX 24PIN connector is compatible. Most do not offer the ATX12V P4 4pin.

This is not a problem as there are adapters which easily convert Molex LP4 connectors into EPS12V and P4 ATX 12V so no need to limit your choices to EPS12V power supplies (though it is nice to have it builtin).I am currently using a Logisys 650W 80Plus Gold power supply which includes an EPS12V and I am using a Startech MOLEX to P4/ATX12V 4-pin adapter for the memory connector.

I’ve changed my power supply to a Corsair 750W Bronze and have been much happier.  If I pegged the CPUs to a very high load the computer would switch off or reboot with the Logisys (it clearly was not 650W or Gold).  I thought the certification could be trusted but this is simply not the case, go with known brands but of course nothing is fool proof but so far I’ve had a 300W GPU, 64GB of RAM, 4 HDDs and 2 CPUs maxed out with 1200% load with no issues on this new Corsair power supply.

CPU Fans & Heatsink are Proprietary (even the power connectors are)

You have to buy the correct HP part# for these but it is worth the money, after 117 days of uptime both heatsinks are luke warm to the touch (no need for liquid cooling).

*I’ve upgraded the RAM recently to 8x8GB for a total of 64GB and the system is running fantastic and always has extra RAM to spare.

It is way too much power for me

As you can see even with a load of nearly 3.0 most cores sit idle and at 800mhz to conserve energy and lower heat, showing that I have way more CPU power and cores than I really need.

I have used 1200% load doing video editing and the great thing is that the system doesn’t really lag compared to doing the same thing on a Quad Core CPU.  There are just so many cores that even if a small percentage relinquish some of their power for my normal Desktop usage that everything works seamlessly, very impressive to me and this is where having the 12-Cores really pays off.

Because of this build I was able to retire 2 servers and combine them into one.  It is an ideal setup having so many SATA ports that I am able to have separate RAID arrays for different functions so IO does not become a factor.

I have a RAID10 array for my main OS and /home, a second array for media and a third for Virtual Servers.

I’ve saved a lot of money, power and also don’t have the hassle of maintaining more systems than I need, all in a rock solid build with more CPU power than I’ll need.

People are always surprised when I tell them what I am using and usually they have spent a lot more on a computer they don’t need and have a CPU that uses far more power (eg. 150+W CPU).

This is a great way to go green, save power and also consolidate unnecessary systems and make life easier so it’s been a win-win.

I am really happy with this setup the PC runs cool and is super quiet. I recently upgraded to the maximum amount of RAM 64GB (8x8GB). Another addition has been an LSI 9200 SAS/SATA card which has 2 SFF8088 connectors that create a total of 8 ports. The main reason is to support 3TB+ drives including my 8TB Seagates for backup.

I am starting to do more video editing now and may consider some of the other AMD Opteron architectures in the future says as the G34 or C32 which have low-power versions with as many as 16-Cores on a single CPU.

The C32 architecture I am interested in would be Opteron 4256EE because it has 8-Cores and a TDP of just 35W with frequency between base 1.6Ghz and half-load turbo 2.8Ghz.  Upgrading to this architecture would save me power, heat and give me more computing power at the same time.